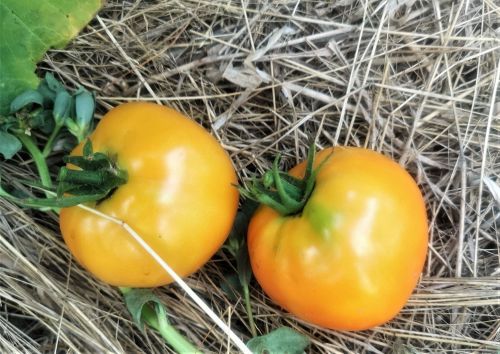 Last year we did some seed swapping with Mark Christensen of the Heritage Food Crops Research Trust. He sent us several varieties of tomatoes which were included in his study titled: Discovery of the Real Tomato (12 April 2013). The study revealed that the original tomatoes which were named ‘Pomodoro’, in Italian, which means ‘golden fruit’ contain higher levels of Tetra-cis-Lycopene which is easily absorbed in the raw fruit and helps to promote health and fight against cancer and heart disease. It appears from their research that the original tomatoes were indeed orange or yellow in colour and the red colour came later through breeding at the loss of this health promoting lycopene. This tomato was one of the ones we trialled from his study which produced well and tastes great. It produces large oblong fruit with thick flesh and lower acidity, does well outdoors. They are great for sauces, salsas or salads. An indeterminate tomato growing to 3m high, frost tender.