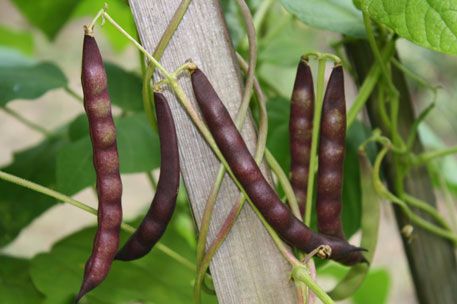 OH Beans originated in Central and South America and were first cultivated in Mexico over 2,000 years ago. All beans belong to the legume family, and therefore fix nitrogen in the soil from the atmosphere, an important ingredient for plant growth. Beans are a great source of protein and go well with corn in the diet. We have grown this bean out as it was gifted to us by the Heritage Food Crops Research Trust along with many other beans as part of their Heirloom Bean Project. Originally from the Lenape tribe in Delaware, USA and later grown by the Quaker farmers of this area this bean is a beautiful blue black when dried. It can be eaten as a green bean or dried for cooking and they are ideal to use in Mexican dishes as you would a black bean. A climbing bean that can grow to 2m height with rose pink flowers whose pods turn purple when ripe and black when dry.