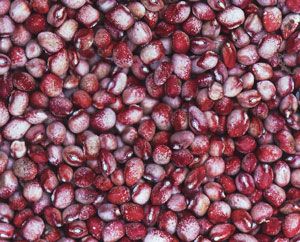 OH Beans originated in Central and South America and were first cultivated in Mexico over 2,000 years ago. All beans belong to the legume family, and therefore fix nitrogen in the soil from the atmosphere, an important ingredient for plant growth. Beans are a great source of protein and go well with corn in the diet. We have grown this bean out as it was gifted to us by the Heritage Food Crops Research Trust along with many other beans as part of their Heirloom Bean Project. This bean has an interesting history that may prove to be legend. It is said this bean arrived on the Mayflower in 1620 with the pilgrims on the boat. As beans originated in the Americas, it is more likely that the pilgrims we gifted the seeds on arrival by the locals. It is said that the pilgrims who arrived on the Mayflower were taught how to harvest beans and squash amongst other foods by the native people. Regardless of its origin, this is a very unusually shaped bean more of a square which is said to be caused by the beans outgrowing their pods before ripening and forcing into squares in the pod. A climbing bean with rich cream colour and maroon speckles. Use when young as a green bean or mature to a lovely dry bean.