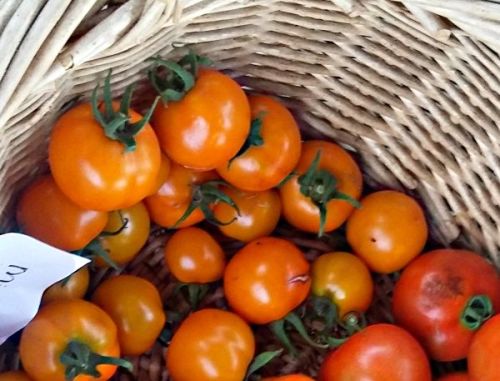 OH In 2014 we did some seed swapping with Mark Christensen of the Heritage Food Crops Research Trust. He sent us several varieties of tomatoes which were included in his study titled: Discovery of the Real Tomato (12 April 2013). The study revealed that the original tomatoes which were named ‘Pomodoro’, in Italian, which means ‘golden fruit’ contain higher levels of Tetra-cis-Lycopene which is easily absorbed in the raw fruit and helps to promote health and fight against cancer and heart disease. Mini Orange rated in this study and is a lovely tomato producing many golf ball sized fruit with a light tangy flavour. Great in salads and any dish you want to stand out. Indeterminate.

Sow in August into trays in a glasshouse. Keep soil temp at 18-20°C for ideal germination. Prick out when true leaves appear to 4cm diagonal spacing. Pot on to small pots to further develop roots. Transplant after last frost to 40cm diagonal spacing into fertile ground in direct sun. Stake and de-lateral as needed.