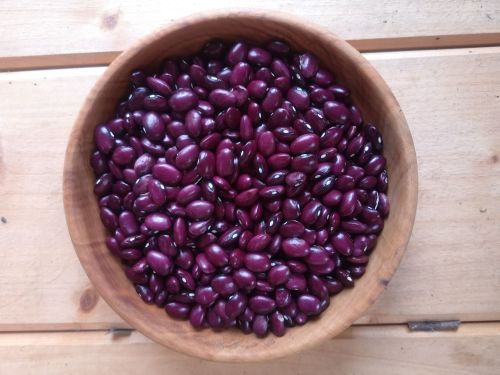 OH The common bean, Phaseolus genus, originated in Mesoamerica. One of the longest cultivated plants, beans were first found being domesticated in the 2nd millennium. This beautiful shiny purple seeded bean came from the high arid village Mesa de Agostadero, Chihuahua. They were cultivated by the Tarahumara people who refer to themselves in their own language as the Rarámuri. These people grew beautiful corn, beans and squash crops in their state Chihuahua, and were forced to retreat to the hills with the arrival of the Spanish conquistadors in the 16th century. They were never conquered by the conquistadors or succumbed to the missionaries in that area. Their culture and language are still upheld today. This is one of their beans still cultivated. With both white and purple flowers, this high yielding climbing bean took us by surprise, producing many, many beans throughout a long season. Best as a dry bean, which has a sweet taste and smooth texture when cooked.