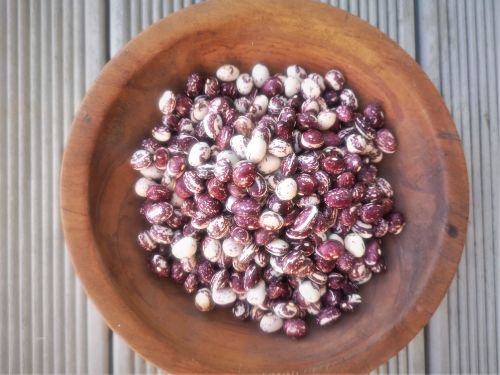 OH This bean has been grown since the 1930’s and is one of the 1,186 varieties of beans John Withee, a bean collector from Massachusetts, donated to the Seed Savers Exchange (Iowa) in 1981. Carrie Belle Stallard from Wise County, Virginia had given the bean to Withee and he used her namesake in the beans name. We have Withee to thank for many beans preservation as he started out buying land and wanting to grow some beans, he built an underground oven to bake beans like his family had growing up. Withee searched for beans he was familiar with in his youth, but he could not find many of the heirloom varieties. This inspired him to develop a non-profit dedicated to bean preservation. Withee drove to food stores across New England and even ventured up to Maine to acquire heirloom beans, and he also developed a national network of bean enthusiasts who would send him varieties from their home gardens. This is how Carrie Belle Stallard found out about him and his bean preservation efforts. Maroon beans splashed with white with 5-6 seeds per pod. They have a wonderful rich meaty flavour, great for soups. 3m height, prolific producers, certainly a good addition to any garden.