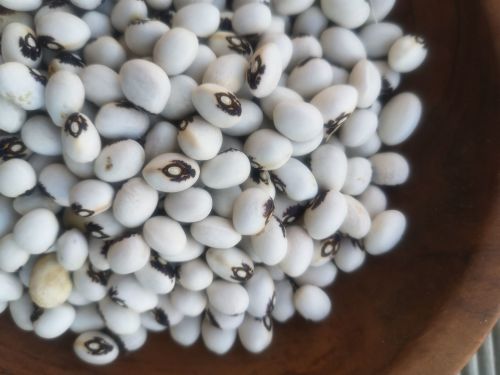 OH This bean was one of the first Heritage seeds we grew as it sparked excitement in me when I read the legend of the creation of the bean. The story goes, that during WWI, a French pastor buried his church’s relics in the garden and to further protect them, he planted white climbing beans on top. When he harvested the beans at eating stage, he was amazed to find a monstrance (a sacred vessel used by the Roman Catholic church) on each bean! It is also known by the name Angel Bean and the image surrounding the hilum of the seed could look like an angel or monstrance to me. Commercial bean growers from Europe cannot explain the miracle, and have not seen anything like it before. There is something truly amazing about the image on each bean, which appears to be painted on with the finest tipped brush, that much is certain. Otherwise, the bean is a cream-coloured round bean with a pleasant, slightly smoky flavour and shorter cooking time than most beans, even when not pre-soaked. 2.5m high climbing bean which produces beautiful orange-red flowers.