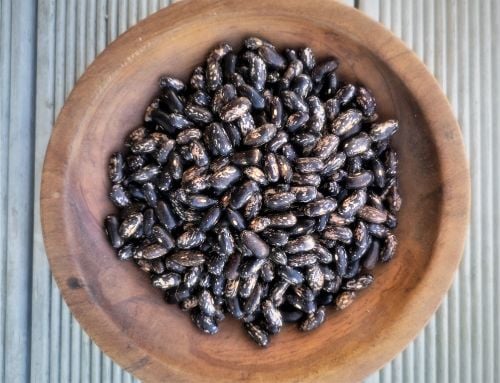 OH This bean was gifted to us last autumn by Phil Stevens from Slow Farm in Ashhurst. He does excellent Permaculture work on his farm and is an avid producer of Biochar. Phil has been growing this bean for 17 years in New Zealand after bringing it over from Arizona, USA. He was gifted the seeds from a friend who had been growing them since the 80’s when he lived in Pennsylvania, USA.  His friend shared that it was a local heirloom called Amish Snap or Purple Snap. It is assumed but not guaranteed that the Pennsylvanian Amish had adapted the variety after probably trading with the Lenape or Susquehannock tribes who originated in the area now inhabited by the Amish, known as Lancaster, PA. A prolific producer of green snap beans, when dried the beans are a beautiful deep purple with tan flecks. A bush type, no staking required.

Sow in glasshouse in trays at 4cm diagonal spacing in September or direct in the garden when chance of frost has passed. From trays prick out when true leaves appear and transplant into fertile soil at 25cm diagonal spacing, no trellis needed as it has a bush habit. For autumn crop repeat sowing in January/February.