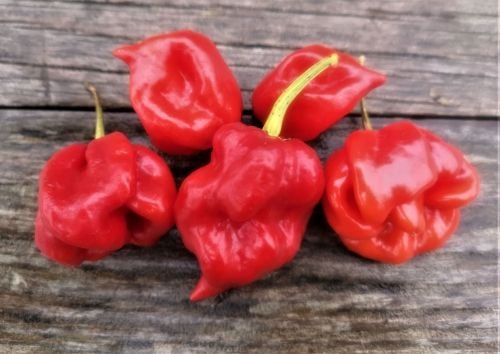 OP The hottest chili in the world! In 2004 Ed Currie from Puckerbutt Pepper Company in South Carolina bred this pepper from a Pakistani Naga chili and a habanero from St. Vincent Island.  He chose the name as the pointy end of the chili resembles the grim reapers hook and Carolina is a nod to where the pepper was created. With an average rating of 1,641,183 on the Scoville Scale, it has been described as having a fruity taste, with the initial bite being sweet and then immediately turning to "molten lava" in your mouth! We do not recommend eating the pepper raw, but instead we use them to flavour hot sauces made with sweet peppers and tomatoes. Capsaicin is the compound that creates the heat in the pepper and it has been said health benefits from eating capsaicin include its ability to slow and destroy cancer cells, anti-oxidant and anti-inflammatory properties and it can increase your metabolism, which increases the rate at which you use energy and burn fat stores, as well as decreases your appetite. Be careful handling the fruit and plants as the spice can transfer to your hands even when harvesting the fruit. We use gloves just to be safe!

Sow in August into trays in a glasshouse. Keep soil temp above 18°C for ideal germination. Prick out when true leaves appear to 4cm diagonal spacing. Pot on to small pot to further develop roots. Transplant after last frost to 40cm diagonal spacing into fertile ground in direct sun. In our climate (winter with a lot of frosts and cooler nights in spring and autumn), we found the best plants were grown in our glasshouse above ground in pots or raised beds, for extra heat in the soil.