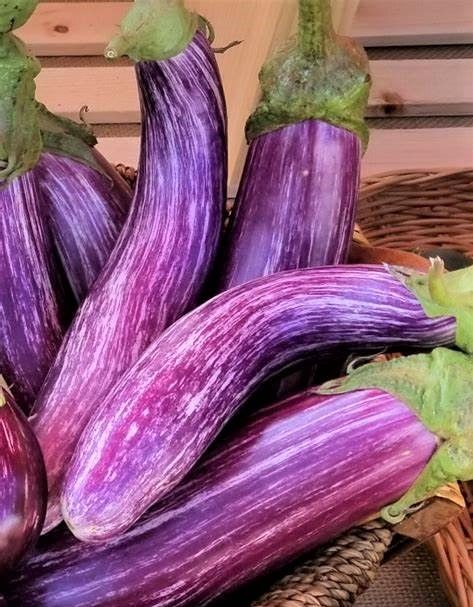 OH Eggplants have a bit of a mystery around them when it comes to their origins. It would seem they may have been developed from the wild cultivar bitter apple (S. incanum) in both East Asia and South Asia simultaneously. It was cultivated widely in the Arab world and they brought them to Spain in the 8th century and then later their seeds travelled to Greece where the variety Tsakoniki is from. Bred in Leonidio, this town to this day is very proud of their eggplant, holding an annual festival in its honour. A sweet flavoured, purple and white streaked delicate skinned eggplant with an oblong shape. A disease resistant, prolific producer whose fruit sometimes form in clusters.

Sow in August into trays in a glasshouse. Keep soil temp above 18°C for ideal germination. Prick out when true leaves appear to 4cm diagonal spacing. Pot on to small pot to further develop roots. Transplant after last frost to 40cm diagonal spacing into fertile ground in direct sun.