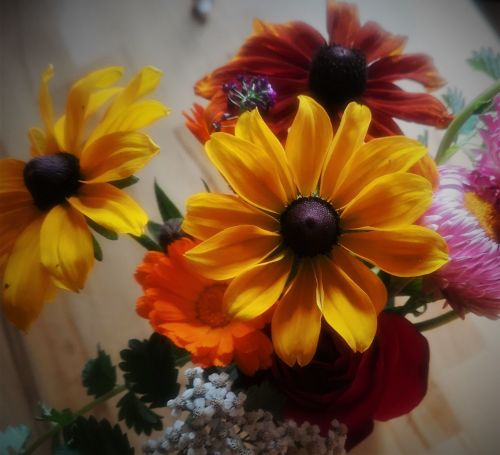 OP As an American immigrant to NZ, I must confess confusion about what all this talk of Rudbeckia was about, having never heard of this flower before! Once I realised these are the very same flowers I love and knew by the name of Black-eyed Susan, all became clear.  Indigenous to Eastern and Central North America, they were introduced into Europe soon after Columbus’s visits. In 1753, Linnaeus gave them the Latin name Rudbeckia Hirta after his mentor Olaf Rudbeck. Hirta means rough and hairy, an apt description of the leaves and stems. Other common names this plant is known by are black-eyed coneflower, gloriosa daisy, golden Jerusalem, poor-land daisy and yellow ox-eye daisy. Native Americans used them medicinally. Traditionally, the roots but not the seedheads were used like the related Echinacea to boost immunity and fight colds, flu and infections. The Ojibwa people used it as a poultice for snake bites and to make an infusion for treating colds and worms in children. Rustic Dwarf Mix has compact plants that produce many large flowers in yellow, gold, bronze and mahogany shades with a contrasting black cone. A prolific self-seeding annual that is drought, heat and soil tolerant. Grows in full sun or partial shade. Points of interest and caution; it is toxic to cats, when ingested and butterflies are attracted them.

Sow into tray in late spring or early summer. Prick out to 4cm diagonal spacing when true leaves appear. After chance of frost has passed, transplant into a garden bed at 30cm diagonal spacing or as you see fit for your garden design.